As he made his way to the cage for Saturday's Fight Hard MMA main event the music Wes Powers selected for his walkout went eerily quiet and the arena fell deathly still.

That was the only the misstep on the night for Powers as he successfully defended his Fight Hard middleweight title over Ed Williams due to a doctor's stoppage at the end of the second round.

"He's a brown belt but that doesn't always mean everything," Powers said. "He wasn't ready to get hit. He's a big guy and I know that you can't chop down a red wood with two swings."

The win over the much-muscled, Brazilian Jiu-Jitsu brown belt earned the spirited fighter from Springfield, IL, a pro contract with Shamrock Fighting Championships.

Check back here for more interviews with Powers and other winners from Saturday night. 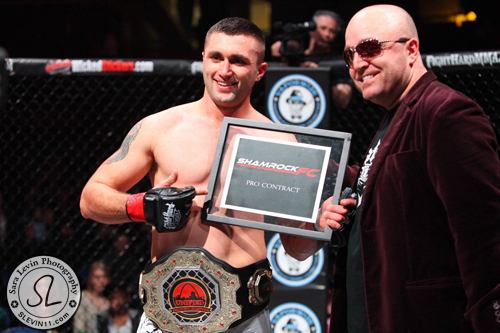 The pair patted through a laborious feeling out process and after the action was halted for a Powers low blow, the champ started to warm up and lock in on his range. I few effective combinations led to mocking and showboating as Powers was out-classing Williams on the feet. He then landed a heavy spin kick to the body and continued to land the odd combination. Powers flirted for a time in Williams' guard right before the end of the round.

Powers dove right into the danger zone in the second round, spending the bulk of the time in Williams' guard. But Powers had nothing to fear as he landed heavy shots and didn't have to deal with nary a submission attempt. After Powers passed Williams' guard, the fight returned to the feet where Powers landed a nice head kick. Powers scored on a sweet, scooping takedown near the round's end. When it looked like it was time for the third round, referee Josh Stewart waved off the action and Powers was declared the winner, who went into the corner and spewed a few barbs at Williams as he sat on the stool. Reports indicated that Williams may have broken his jaw and fought the bulk of the second round with a dislocated jaw.

In the second of two lightweight tournament eliminator bouts, Buddy McGinnis scored an unanimous decision victory over Terrance Gant in a fight that was light on action.

The lanky, 6-foot-2 McGinnis landed a sharp right to start the fight and defended a single leg takedown attempt. He landed another right after the restart before Gant scored with a nice trip. McGinnis scored a takedown right before the horn.

In the second, McGinnis traded punched while in Gant's guard for the bulk of the round. In the third, McGinnis pressed early while Gant was in retreat mode as a chorus of boos rained down from the Family Arena rafters. McGinnis was able to pick away and seal the 30-27 unanimous decision win.

"I thought he took the first round with a the takedown," McGinnis said. "I was able to push the pace in the second and third rounds. I had to chase him down a little bit. I think he was trying to bait me so he could get the takedown. In the third, I walked all over him with my striking. He had no answer for it."

In the first of the two lightweight title eliminator bouts, Dan "Cold as Ice" Busch snagged a late arm bar in the second round to beat Cody Huff.

Busch pressed Huff against the fence early in the first round before Huff landed a nice trip for a takedown. Huff did a good job of mixing things up, landing an occasional kick, before scoring another takedown.

In the second, Busch landed an early kick to the body. Huff's pressure led to a takedown. After a long scramble on the ground, Huff was deducted one point for a head butt. After the restart, Huff caught a kick and landed a sharp right. A scramble on the floor led to Busch on Huff's back dropping several shots before getting the submission at 2:24.

Busch and McGinnis will now meet in the main event on Feb. 7 for the Fight Hard lightweight title.

Jason Huncovsky and Frank Cortez woke up the crowd with an exciting back and forth affair. The first round saw both a bit tentative and looking for the one big punch. Huncovsky landed a couple of solid leg kicks that looked to hurt Cortez.

In the second, Cortez was determined to keep the pressure on. Cortez forced Huncovsky into the cage and eventually got the fight to the ground where he took the back and rode out most of the round. With less than five seconds to go, Huncovsky reversed position and landed a few punches from the guard.

Cortez looked winded to start the third as he limped to the center of the cage to start the round. After a brief exchange, Cortez scooped up Huncovsky for a big slam, but Huncovsky immediately righted the ship and mounted his opponent. With every punch from Huncovsky the crowed seemed to get louder. After the reset, Cortez was desperate for a takedown, but was unable to land one. Huncovsky ended the fight on top, working his ground and pound before the round ended. The judges turned in a 29-28 decision victory for Cortez out of Dark Horse MMA.

"I wasn't expecting him to have the cardio that he did because I knew he's lost like 60 pounds in the last year," Cortez said. "He punches hard, for sure. I did enough to win. I know a few of those punches hurt him."

Byron Stevens, out of Modern Combat Systems, bullied around Dusty Chandler. Stevens landed a two quick punches and defended the takedown well. After a scramble put Chandler on the floor with his back to the cage, it wasn't log before Stevens, who dropped several hammerfists, got the TKO win

It was typical, bruise-faced, nail-biting night for Matthew Nall.

Nall and Jordan Collins went tit for tat for three rounds with Nall, out of tiny Salem, coming away with a split decision victory.

In what's becoming common, Nall was taking a beating while on his back in the first round before snagging an arm and attempting an arm bar. Nall went for another submission attempt, a rear naked choke, as the round came to a halt.

Collins's grit and power nearly ended the fight in the second round with some crisp and effective ground and pound that had Nall seeing stars.

In the third, Nall landed a nice sweep at the 1:43 mark of the round and took the back. Collins defended a rear naked choke for nearly 1:30 before the horn sounded to end the fight.

"I thought I had (the decision) by control," Nall said. "I know he landed a lot more good shots on me. He almost had me out with some of those ground and pound shots. I was just holding on for dear life and managed to get back control. I don't know if it's just nerves, but most of the time I'm just looking for the submission and not worried about the strikes."

Fred Freeman landed a sweet front kick to the face to Cody Durbin but that was about it for the MCS veteran as Durbin locked up a triangle for the first round win.

Derek Clardy and Markell Bolden went at it old-school style. The pair traded punches in bunches before Bolden tried a guillotine. While on the floor, the action was stopped and once restarted, the pair went back to rock 'em, sock 'em mode. Clardy eventually powered his way to mount. Bolden gave up his back and Clardy went for the finish, earning a TKO win.

Dustin Tucker clamped on a rear naked choke to defeat Bryant Crites in the first round.

Justin Williams started the night with a submission win via triangle over Cody Weeder in the first round.

Fight Hard returns February 7th for the finals of the unified lightweight championship.