Pro Fight of the Year: Freeman vs Washington

When the fight between Zach Freeman against Robert Washington was announced a collective ‘Oooo’ could be heard.

Fight Hard MMA was going to start off 2013 with a bang as it signed, sealed and delivered a matchup between two of the best lightweights, not only in St. Louis but in the Midwest. It was also determined that the fight (though scheduled for three rounds) would be a first for Fight Hard nation; a professional championship.

Knuckle Junkies tracked down and caught up with the players involved; Freeman, Washington, and Fight Hard MMA president Kenny Nowling to talk about the fight you readers picked as the 2013 Pro Fight of the Year.

Kenny Nowling: “This was a fight that we wanted to put on to break down some of those St. Louis barriers. You would have friends and acquaintances that had trained some together but would never fight. Then having a Finney fighter (Washington) against a St. Charles MMA fighter (Freeman) was just an all-around cool deal. Both Rob and Zach have such a strong fighting pedigree. The fact that we were getting two gladiators certainly helped.”

Rob Washington: “I had a lot people tell me a lot of different things as far as what he was going to do. Sometimes I’m too influenced by what I hear.”

Zach Freeman: “Rob and I had trained together, grappled in NAGA, and talked a lot. It made it more intense. He knew my tendencies and he had gotten the better of me in sparring just like I had got him. It was a little awkward but when it comes time to fight, that stuff kinda goes out the window. I remember having this confidence deep inside and I think that played a huge part.” 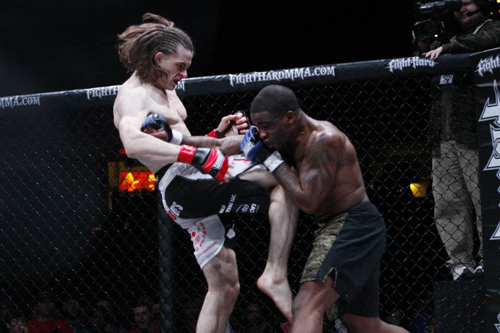 Early in the fight, Freeman was effective in the clinch, landing solid knees. Washington came back with some crisp, powerful shots underneath and landed hooks to the body. Washington took a ton of punishment up against the cage but squirted free once again. On the ensuing scramble, Freeman had Washington in his guard and was working a submission as well as landed elbows as the round came to a close.

ZF: “Right after we touched gloves he hit me with a body shot that knocked the wind out of me. He hit me solid and I thought, ‘Oh my God.’ From there I just came forward with no emotion and tried to land a knee up the middle. When he hit me with that first body shot I automatically knew it was going to hurt me towards the end of the fight. He ended up falling into a triangle and I tried to adjust and lock it up but he has big shoulders, neck and head and it just wouldn’t.”

KN: “Both of these guys were ultra-aggressive.” 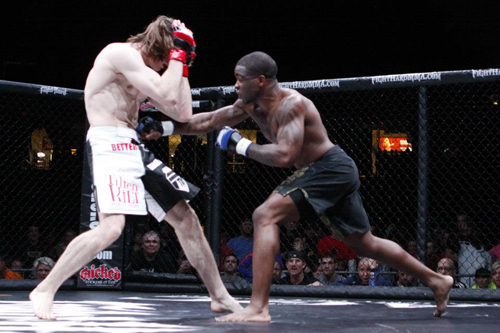 RW: “I picked things up and pushed the pace. I had some opportunities slip by that I could have capitalized on. We were in the clinch and he fell and I just watched him. I was just so fatigued. I had no energy to capitalize. He got a takedown near the end that sealed the round.”

ZF: “He started off the round really well and I was getting frustrated. I wanted to get the takedown and ended up getting it against the cage. Then he caught me with a right hand and it rang my bell. I staggered back and remember thinking, ‘why isn’t he attacking?’ That gave me a chance to recover.” 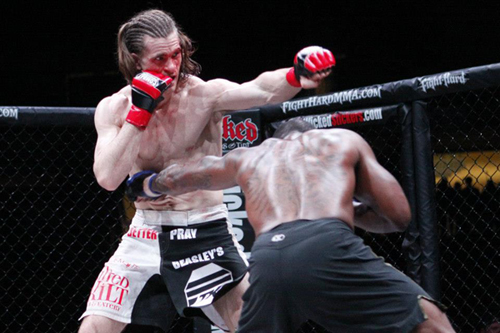 Washington answered the third a swollen eye and Freeman had a cut that needed stitches. Washington started the with some crisp boxing. He was able to keep good separation during the early portion of the round before Freeman aggressively closed the distance, put Washington on his back and rained punches. Washington was good at creating scramble opportunities all night and once again got to his feet. But Freeman chased him down and finished the night off with a powerful double-leg to secure the unanimous decision victory.

RW: “He landed a good knee that cut me near the side of my eye. I had never been cut before. His wrestling dominated. He controlled the fight. I knew he had won.”

KN: “Zach has such a tough ground game.”

ZF: “I truly think I finished him with that slam. He was lying there motionless and Mike England stood me up right before the bell. It was really weird. I knew I had to finish with that last burst of energy.”

Freeman would go on to suffer the first loss of his career when he fell to Jake Lindsey at Titan FC in June. He was slated to fight locally in the fall but a groin injury put him on the shelf for the rest of 2013. Washington followed with a live fight on TV for CFA 11 where he lost to Luis Palomino. He sprang back in October to get a convincing first round win over Charon Spain. Washington will be back in action on Jan. 18 at SFC: Demolition against Jeremy Castro.

RW: “There were a lot of things (in the Freeman fight) I could have done better. My cardio wasn’t there. I got tired. I was happy with the performance but it wasn’t the best I could have been. He was the better fighter that day. If anything, it proved that I could fight a whole fight and not be in great shape. I was happy to finish and give the fans what they wanted.”

ZF: “It was a good night. My brother had a baby that night as well. There have been a lot of great fighters come through that Fight Hard cage and to win the first-ever professional belt meant a lot. I would really like to defend it in 2014. I don’t think you are a true champion until you defend your title. I want this injury to heal. I didn’t know (a groin tear) was such a lengthy process but I know I will have a good 2014. That night, it was an awesome time even though my head hurt pretty bad.”

KN: “It lived up to the billing. The two fights that I’m always asked about are Lucas Gwaltney vs. Abel Trujillo and Freeman vs. Washington. I think Rob and Zach are on the same career path. I wouldn’t be surprised if one or both are in the UFC when it’s all said and done.”