Ty Flores proved once again that he's tougher than a $2 steak.

In the main event of Friday's Shamrock FC 311 at the River City Casino, Flores notched his fourth straight win and improved to 6-2 with a win over UFC-vet James Bochnovic (9-4), his most impressive win to date.

The win presents Flores, Finney's MMA, the opportunity to face Johnny Elben for the promotions' vacant middleweight title. But Flores spoke in the upcoming KJ post-fight video that light heavyweight is a much happier home for him.

Bochnovic was active from the start of the first round, pumping punches into Flores. Flores answered with a nice exchange and as the round wore on, a bloodied Flores started to rev up. A mouthpiece to the canvas and an eye poke slowed action some. After the restart, the two traded heat in the pocket before Flores - who was dogged for a takedown all round - finally got one late. Once Back to the feet, Bochnovic landed a nice knee and Flores connected on a kick to the body.

In the second, Flores started to gain more confidence with his striking and continued to land nice, short shots. He caught a kick and dumped Bochnovic around the three minute mark. From Bochnovic's guard, Flores applied pressure, slid to half guard before eventually making his way to side control. Once back to the feet, Flores pressed Bochnovic to the cage and dumped him for a takedown.

The third round saw Flores dump Bochnovic off a single leg 30 seconds in. With fatigue setting in for both, Flores pressed Bochnovic against the cage for the bulk of the middle portion of the round. Flores earned a takedown around the 1:24 mark and then let Bochnovic back to his feet before once again, pressing him to the fence. Bochnovic mounted little offense the entire round as the fight ended with the two trading in the center of the cage.

Two former STL MMA Pro Fighters of the Year Sean Woodson (2017) and Rashard Lovelace (2016) met in a rematch in the co-main event. And like the first time the two met in the spring of last year, Woodson came away with a unanimous decision victory and remained unbeaten at 5-0.

The third round was all Woodson as he punched away as Lovelace just covered and leaned against the fence. Woodson got another takedown and then let Lovelace back up and went back to work. He wrapped a bow around the performance with late takedown.

In the second, Woodson continued to do what he does well, stick and move. Lovelace couldn't get any offense going. Woodson opted to show another side of his game as he pressed against the cage before getting the takedown. Lovelace (4-2) got back up and tried to harness some momentum late but couldn't make much of it.

Early in the first round saw Lovelace's best output. Woodson was catching kicks and was willing to take one to land one. But by the midway point of the round, Woodson was undetoured. The 6-foot-3 striker from the Wolves Den started to loosen up and connect around the two minute mark. Woodson's takedown defense was on point and continued to apply the heat until the bell. 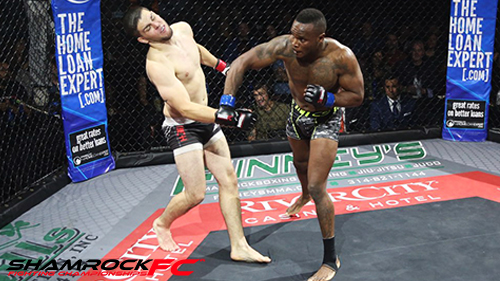 Like a flick of a switch, Eric Ellington turned out the lights on Scott Ettling.

Ellington landed a thunderous overhand right to get the KO at 44 seconds in the second round in a featherweight showdown.

Ettling came out in the second round fresh and active, going back to the leg kicks that were successful for him in the first. Ettling got a little sloppy with his hands and Ellington made him pay all while improving to 6-1.

Ellington knocked Ettling to the ground in first minute. But Ettling quickly got back to his feet and began working leg kicks. Ettling (5-3) followed with a takedown and quickly to mount at the 2:45 mark. Ellington powered his way to top position and the fight returned to the feet. After a wild exchange and scramble near the one minute mark, Ellington earned a late takedown.

All was not a loss for Ettling, who proposed to his girlfriend inside the SFC cage following the fight.

Kicking off the main card, Murobek "Max" Chiroriev faced Tony Grant at welterweight. The pair went to the floor almost instantly and the two jockeyed for positions until Chiroriev got on top and started dropping heavy shots. Chiroriev clung to back and landed multiple hammerfists. With his hooks in deep and Grant flattened, Chiroriev went for and got the rear naked choke 2:02 in the first round.

Mike Manning was able to get the better of Ian Zarvos with an americana in a short middleweight bout.

Flyweights Auston Cornell and Cody Linne treated the fans to an exciting first round. Cornell had to battle out of a standing guillotine to get the fight to the ground where he found good use of his wrestling, landing punches from side control, but ultimately could not get the finish. Linne sustained what appeared to be a broken clavicle during the takedown and could not answer the bell for the second round awarding Cornell the victory.

A couple of boxers met inside the cage and Jimmy D'Angelo got the better of Hahn MMA's Austin Woodcock. The fighters traded shots on their feet before D'Angelo got Woodcock's back to the cage and dumped him onto the mat, a scramble saw D'Angelo land on his back and from there he immediately went into the setup for a triangle. D'Angelo put on the squeeze, and with only a minute and a half remaining he closed the deal putting Woodcock completely unconscious. D'Angelo, representing St. Charles MMA, picks up his fourth win in a row and remained unbeaten in his amateur MMA career.

Dan Herina was greeted with the loudest ovation of the night and once again he delivered. After absorbing some early offense from opponent Jack Hobbs, Herina started to connect with a piston-like left hand. With nine seconds left in the round, the accurate Herina landed a flurry of punches that sent Hobbs face down to the canvas forcing the ref to wave off the bout.

Jesse Conway turned up the heat in a grapple heavy bout with Devin Miller. Conway unleashed relentless pressure from the top and then the back nearly getting a rear naked choke to stick in the first round. In the second Conway ended up in side control, before gaining full mount and working punches from the top. The third was Miller's best round connecting with several punches, putting Conway on the back pedal. Eventually Conway turned the tide and got Miller to his back where he worked from the top.

In a women's amateur kickboxing match, Liz Turpin never stopped advancing on her opponent Melissa Lorber. Turpin ate a tremendous amount of jabs but continued to move forward looking to land knees to the body. In the second, Lorber started to find a home for her kicks with a shot to the head that slowed Turpin temporarily. The third was more of the same with Lorber wearing down Turpin on her way to a unanimous decision victory.

Bantamweights Alejandro Socorro and Troy Shaw tangled in a fight that went quickly to the mat. With Socorro on the bottom, he hit a slick back take from a scramble getting both hooks in. After teasing a move to the mount, Socorro adjusted his grip on the rear naked choke finishing at 2:25 in the first.

Kicking off things on the night was a welterweight bout between Arvin Mills and Tyree Davis. Mills looked to close the distance and drag the fight to the ground, hitting a double leg takedown with a minute to go in the round, ending up in full mount. Mills hit a sweep with 45 seconds left in the round to get on top where he started working his ground and pound, nearly getting triangled in the process.

Davis, fighting out of Raven Ridge MMA, continued his momentum in the second round taking the back of Mills pounding out a TKO 2 minutes and 11 seconds into the round.